Bogdan Globa — human rights and LGBTQ activist, leader, and co-founder of QUA - LGBTQ UKRAINIANS IN AMERICA (based in Washington, D.C.), first openly gay person to address the Ukrainian Parliament and named "Top 30 under 30 Ukrainians" by KyvPost in 2016. 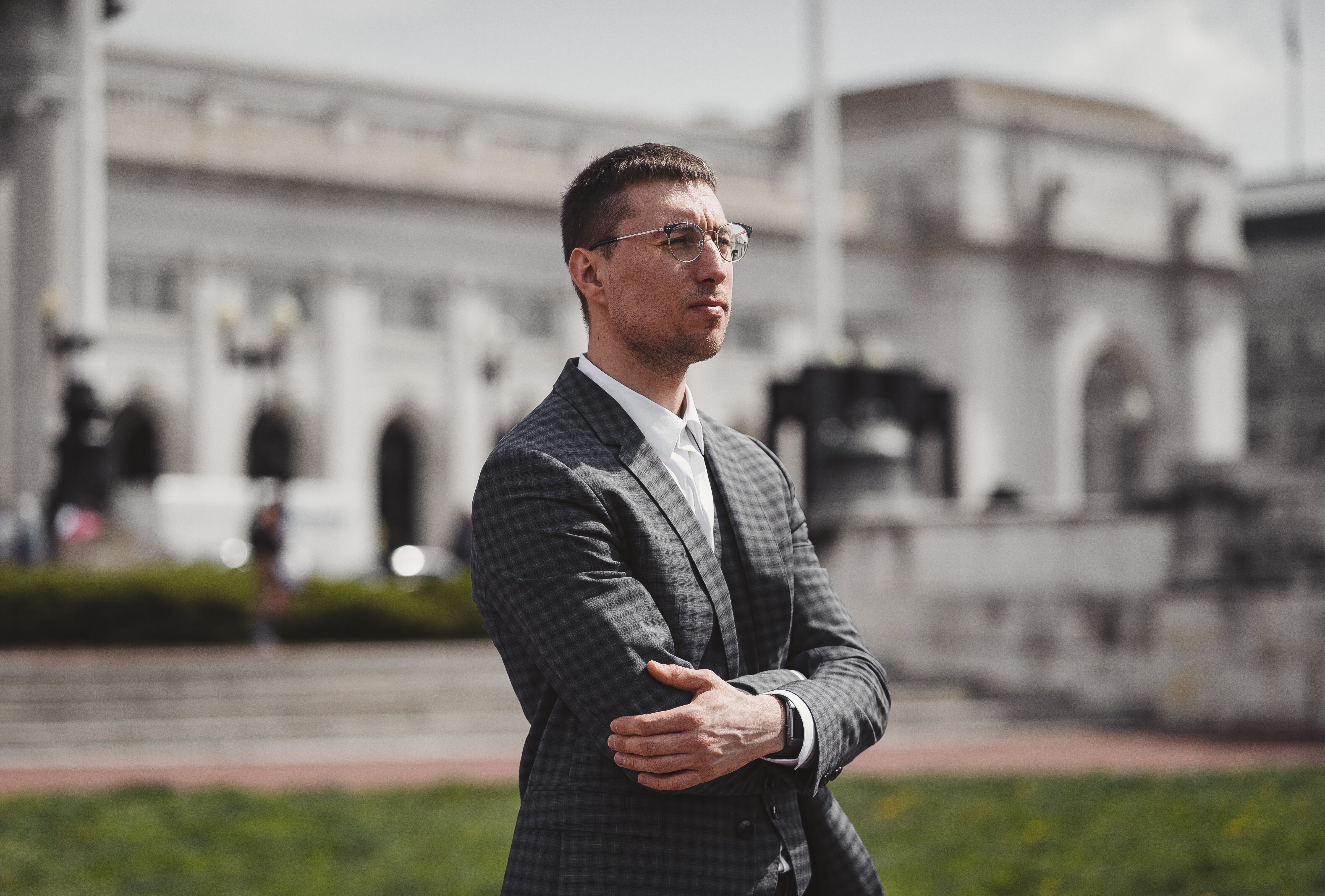 In November 2016, Bogdan came to the US at the invitation of Brown University to give a lecture on the LGBTQ movement in Ukraine. As he had received numerous death threats due to his visible LGBTQ activism in Ukraine, he made a difficult decision and asked for political asylum in the USA. He settled down in New York and in 2018, he co-founded QUA - LGBTQ Ukrainians in America, the first Ukrainian LGBTQ organization in the US, alongside other LGBTQ Ukrainian activists in order to support, connect, and advocate for Ukrainian LGBTQ people who have immigrated to the US.

In 2019, he organized the first Ukrainian group at the World Pride in New York City. The group was accompanied by Georgian and Belarusian LGBTQ activists, as well as guests from TERGO, an organization of Ukrainian parents of LGBTQ people.

In February 2019, Globa co-organized and participated in a panel discussion titled "Global LGBT Civil Rights Policy: Implications of the 2018 Midterm Rainbow Wave" at Georgetown University's McCourt School of Public Policy, where he and his mother Olena Hloba, the leader of TERGO, had a conversation about the election's implications for LGBTQ human rights in Ukraine.

In March 2019, the Georgetown Public Policy Review published his Op-ed, "How Russia exports homophobia into Ukraine".

On June 27 of the same year, he co-organized a Panel discussion titled "Human Rights for LGBTQ Community in New Political Realities - New Challenges or Opportunities?" on Capitol Hill. The panel discussion members of the Congressional LGBT Equality Caucus, a number of staffers, and a delegation from TERGO.

As part of QUA's advocacy work, he helped arrange the panel discussion with Max Nefedov, first deputy minister of economy of Ukraine, at Georgetown University. Globa also set up several events about the current situation with LGBTQ rights in Ukraine at NYU and Columbia University (NYC), which inspired a publication through the Harriman Institute at Columbia University titled "The Politics of Anti-LGBTQ Propaganda in Russia and Ukraine".

In March 2020, Bogdan and the QUA team finished incorporating QUA - LGBTQ Ukrainians in America as an American non-profit organization, and obtained official tax-exempt status from the US government.

In 2012, Bogdan was selected to participate in a special training course, "Advocacy of LGBT Rights in the USA", funded by the US State Department Bureau for Educational and Cultural Affairs.

On July 23, 2014, he spoke in the United States Capitol on LGBT rights in Ukraine.

Bogdan was an active leader in the EuroMaidan movement and Revolution of Dignity in Ukraine (2013-2014). He called on the LGBT community to participate in the revolution under the European flag rather than the rainbow flag to maintain unity and avoid a damaging split into ineffective factions. He also spoke out against pro-Russian forces that were trying to splinter the EuroMaidan protest movement by fomenting controversy related to LGBT rights.

On January 14, 2014, in protest of a fake “gay parade” designed to undermine the movement, Bogdan organized a peaceful protest near the office of “Ukrainian Choice,” the organization that had co-organized the provocation. During the demonstration, along with other activists, Bogdan attempted to present the organization’s leader Mr. Medvedchuk with a fake ceremonial certificate “For significant contribution to the development of LGBT movement” that featured the famous photo of the kiss between Henry Kissinger and Leonid Brezhnev. The symbolic gesture was meant to call attention to the law on the “Prohibition of Homosexual Propaganda” that had been adopted by the Ukrainian Parliament upon its first reading, and formed a part of several “dictatorship laws” passed under ousted President Yanukovych.

On November 12, 2015, together with members of parliament Svitlana Zalishchuk and Mustafa Nayyem, he hung a banner on the balcony of the Verkhovna Rada bearing the words “Equality for all” and the logo of the Human Rights Campaign – the biggest pro-LGBT rights organization. This was to celebrate a momentous occasion - on that day the Verkhovna Rada adopted draft law #3442, which prohibits discrimination based on sexual orientation and gender identity in Ukraine, with a majority of 234. 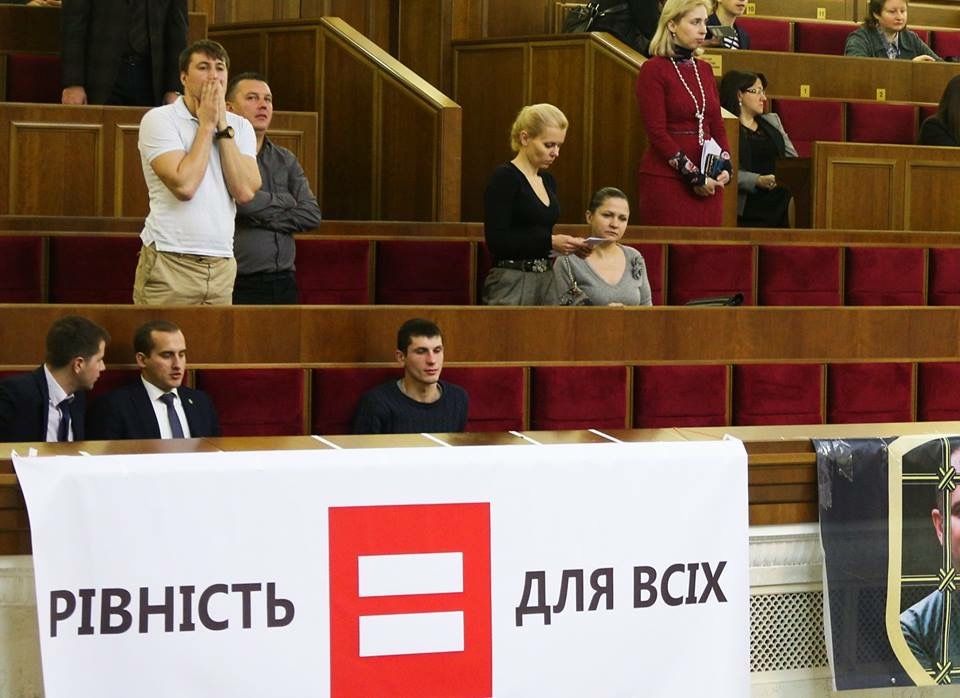 In June 2014, a public conflict broke out between Bogdan Globa and the Democratic Alliance Party in Ukraine. The conflict started when Bogdan’s application for membership in the party had been rejected on the grounds that his LGBT activism contradicted the Christian values of the party. After Bogdan published correspondence with the deputy head of the party on his Facebook page, a follow-up discussion went viral on the social media platform. Many supporters of the Democratic Alliance were surprised to find out about the party’s Christian ideology and internal opposition to key issues such as same-sex marriages and legal abortion, as prior to this conflict, the party had positioned itself as a young, democratic, pro-European party.

At the press conference organized to address the conflict, Vasyl Gatsko, the head of Democratic Alliance party, commented on the denial of membership to Bogdan Globa, “The philosophy [of the party] assumes that family is a union of a man and a woman. At the same time, we do not deny and do not mind that other forms of life are possible”.

Bogdan Globa was born in Zachepylivka, a semi-rural town located in the Kharkiv Oblast (province) of Ukraine, about 200 km south of Kyiv, the capital. In 1995, his family moved to Poltava. He grew in the family of teachers; his mother was an English teacher, and his father taught economic theory.

Guest op-ed: How Russia exports homophobia into UkraineBogdan Globa: US midterms critical for minorities around globeEU and Ukraine: too busy to protect gay rights?LGBTQ rights in Ukraine and the false dawn of ZelenskyyBiden-Harris Administration: Will their time in office become a renaissance for the LGBTQ community and human rights in Ukraine?