Tymur Levchuk, the cofounder of Fulcrum like every Ukrainian, contributes to the common victory over the Russian invaders. Together with his colleagues, he opened two shelters in Lviv and gave many people the opportunity to be safe. It is difficult to find accommodation in Lviv during the war, especially for men, and in the dormitories of Fulcrum, one can live and eat for free. Tymur told QUA how they came up with the project, who is financing it, and what is ahead of Ukrainian LGBT people after the war. 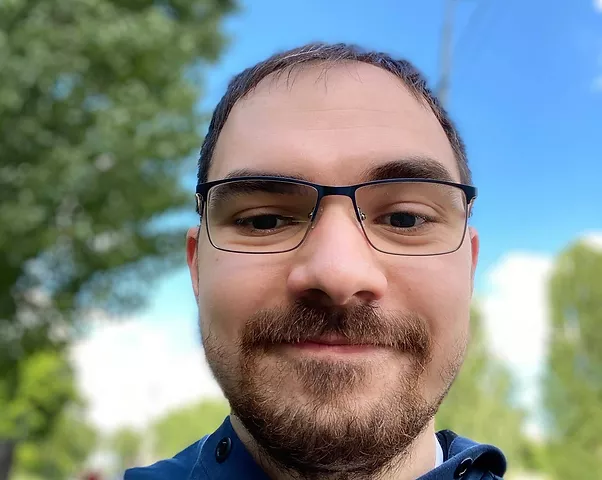 I arrived in Lviv a week before the war. My husband moved there because of work, and I followed him. However, on the night of February 24, I went back to Kyiv, where we had an event with Fulcrum - rewarding a business that supports human rights. It was to begin at eleven o’clock in the morning, and the shelling began earlier - at five. It was completely unexpected, no one believed that the war would really happen. For two hours I just sat and thought about what to do next, trying to find a basement to hide, but Kyiv was not ready for shelling - the basements were closed. The only option for shelter was the subway, which still had to be reached. As a result, at seven in the morning, my sister took me by car, and we drove back to Lviv. Due to traffic jams, the road took almost a day.

For the first week, my colleague Anton and I did not know what to do. But then our local friends offered us their office space, where we organized our first shelter. The office was not designed for people to live there, so we started to equip it - we bought a boiler, found a shower, and took care of plumbing, microwave, multicooker, and water filters. We organized stocks of food and drinking water in the shelter. Later we opened a second shelter, which was located in the former bar. We were not sure about it because we didn’t want people to live in the basement - it was chilly and there was little light. However, the intensity of air alarms increased in Lviv, and we saw all the benefits of this shelter: people could sleep all night and not run away. We loved this shelter. When Biden came to Poland and Lviv was heavily shelled, we spent many hours there, cooked dinner together with its residents, it was very atmospheric.

Who lives in Fulcrum’s shelters?

Our organization has advocated inclusive policies all its life. We opened shelters with a focus on LGBT+ people, but then those who supported us as allies and their relatives began to turn to us. I think it is not fair to refuse such people. Currently, both members of the LGBT community and those who do not belong to it live in our shelters. We immediately tell new residents that you can meet transgender people here, so it’s better to ask how to address the person - you may think it’s a girl, but in fact, it’s a guy. This is great because even in such a strange way, we have retained our educational function. Ordinary Ukrainians have the opportunity to spend the night with LGBT people in the same room, cook with them and get a positive experience from such coexistence.

Many people stop here temporarily, traveling abroad through Lviv. They need to wash their clothes, sleep, eat, pull their thoughts, and move on. There are about twenty people. Eighteen people now live with us permanently. These are mostly men or transgender people with a male marker in their passport who cannot leave Ukraine. If they manage to find a permanent apartment, we are happy, because, despite all our efforts, the shelter can not provide private space. And although the vast majority of people living in shelters fled the war, we have one guy from the Lviv region. He had a confrontation with his parents, and they kicked him out of the house. It is possible that there will be more such residents in the shelter, because many people from the LGBT community are returning to live with their parents from big cities, and there may be conflicts between them. We are ready to accept such people.

In addition to accommodation, we provide financial assistance. People can fill out a form and get about fifty dollars. With an average Ukrainian salary of five hundred dollars, this is not a large amount, but it can be used for anything, we do not control it. We can also provide additional money, for example, for medicines for people with chronic diseases. We ask them to confirm such purchases with a check. 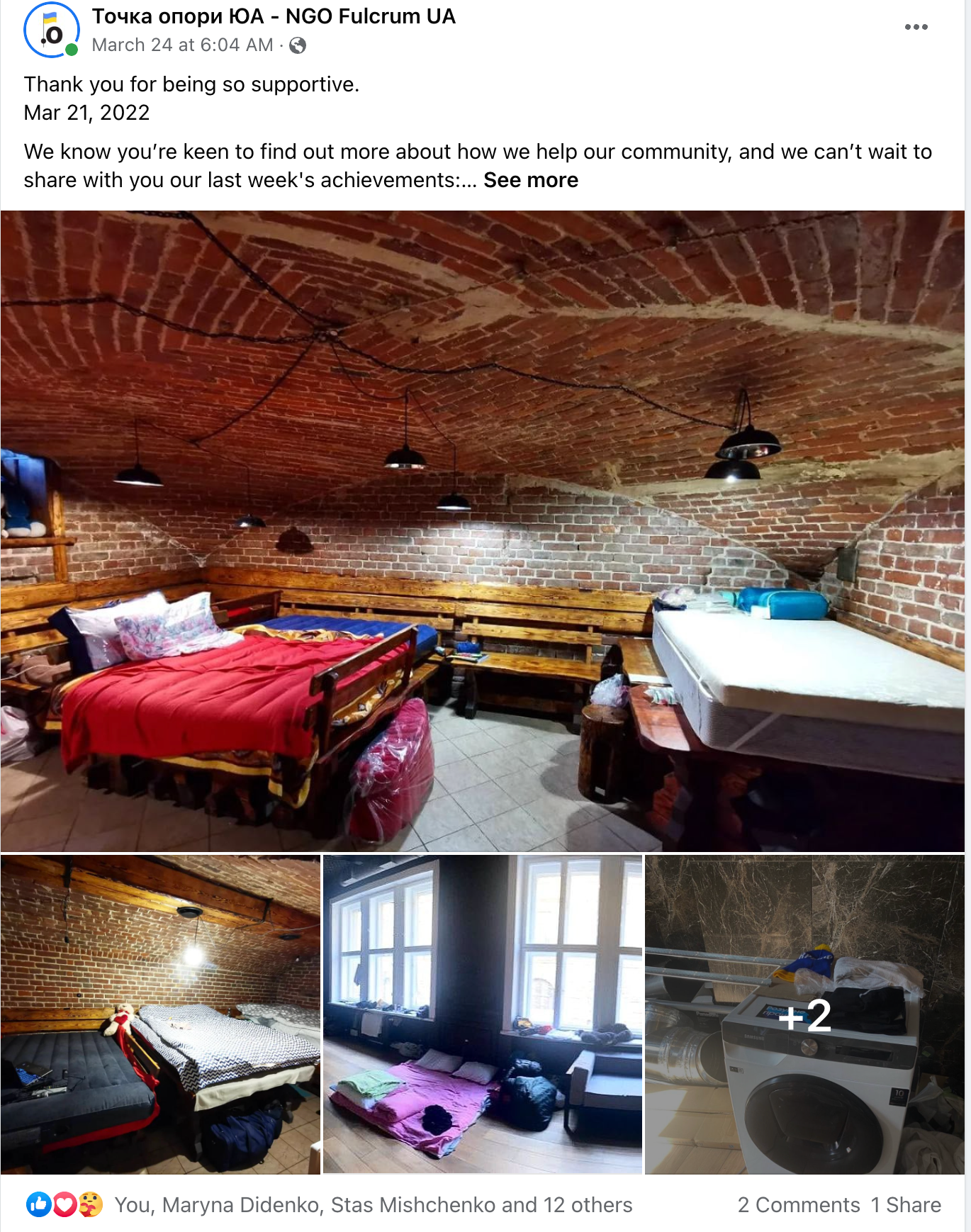 We were first funded by the Sidaction, a French HIV prevention fund. From the very beginning of the war, they allowed the distribution of funds so as to make repairs in the shelters and buy the necessary appliances. We have received assistance from QUA, Kyiv Munich Queer, and the Swedish LGBT organization RFSL, and such organizations as Lush and the American OutRight also plan to support us. Now everything is structured, and in the beginning, there was no structure. We did not plan how much money we should spend on certain needs, we bought everything spontaneously. For example, in one week we bought products for a thousand dollars because we did not understand whether they will be on store shelves: the variety of products is shrinking, and no one knows how long it will last. In addition, everything is only getting more expensive, and we no longer have money - we exchange dollars at the rate set by the National Bank. We currently have funds for at least three months for shelters to be operating. The money covers rent, utilities, food, and water.

We also use the funding we have for humanitarian initiatives that focus on the military. We help in terms of logistics as loaders and communicators. There are organizations that deal purely with military assistance, and we help them: we can transfer products and first aid kits that we find and buy in Europe. We also support other people who open shelters for the community and allies. The LGBT group is vulnerable, but we must stand in solidarity with everyone. When they help us, they don’t ask which group we belong to, and we come from the same position.

We focus on shelters primarily because it is very difficult for men in the western regions to find accommodation. Even if it is a family, the wife and children can find where to stay but the husband most likely will not have this possibility. I am not saying that the people of Lviv unanimously believe that everyone should go to the front line, but you can feel the atmosphere. I do not agree with this, because a person can be much more useful on the home front. If the person is able to organize logistics and bring two hundred bulletproof vests every month, then the benefits of it are greater than in the army. But for that, people need to feel protected.

Although men are also different. There are people like me and my colleague who volunteer and bring humanitarian aid. But there are other, usually well-off people who live in the most expensive hotels in Lviv and instead of helping, sit in cafes and drink coffee. This raises many questions, because the country is at war, and this man in his car could at least bring food or people from the station. Many drivers now transport displaced people to Lviv for free. If you are already in this city, do something, because there are never too many hands.

However, I urge all LGBT people who have the opportunity to go abroad to do so. There is a rational argument for this: the infrastructure of Western Ukraine is not designed for such a large number of people. The EU is fully prepared to give the community the right to live there for at least a year, and this removes a huge number of infrastructure issues. According to official data, 200,000 people came to Lviv. I can see that garbage is not removed in time, because it is several times more than usual, in the city center there are constant traffic jams. All these people need to be fed, which means that the humanitarian aid keeps on coming (and also gets stuck in traffic jams). If people can go to Europe and live there in peace, and ideally find a job and support the Ukrainian army, let them do it.

It is better for LGBT people to leave Ukraine for other reasons as well. We do not know when the war will end, but we know that there will be economic hardship, and the unemployment level will rise. In addition, post-war societies always tend to become conservative. There is no country in which war has taken place and liberal values ​​have flourished since then because those values are somehow combined with economic success. I believe that after the war, LGBT people will not be a priority for the government. Due to the hardships, the level of aggression will increase, and there will be more hate crimes than before the war. Will the police have enough capacity to fight this?

Let’s not forget that Ukrainians have been given a lot of weapons, and who knows if there is a mechanism for how to remove these weapons later. But I can imagine that if we want to organize a pride, people who will oppose will come out with machine guns. Given these arguments, it is better to go to European countries, where you can get an education, learn a language, find a job, and support relatives who have stayed here. And then come back and rebuild Ukraine with the acquired skills.