As long as he remembers himself, Pavlo Chernyshenko from Kyiv sought opportunities for his personal growth: he studied in foreign universities, built a career, and lived in different countries. But when he became a father, he gave up the crazy rhythm of life without hesitation. Pavlo and his husband Brian now live in Los Angeles and are raising their son, Declan. 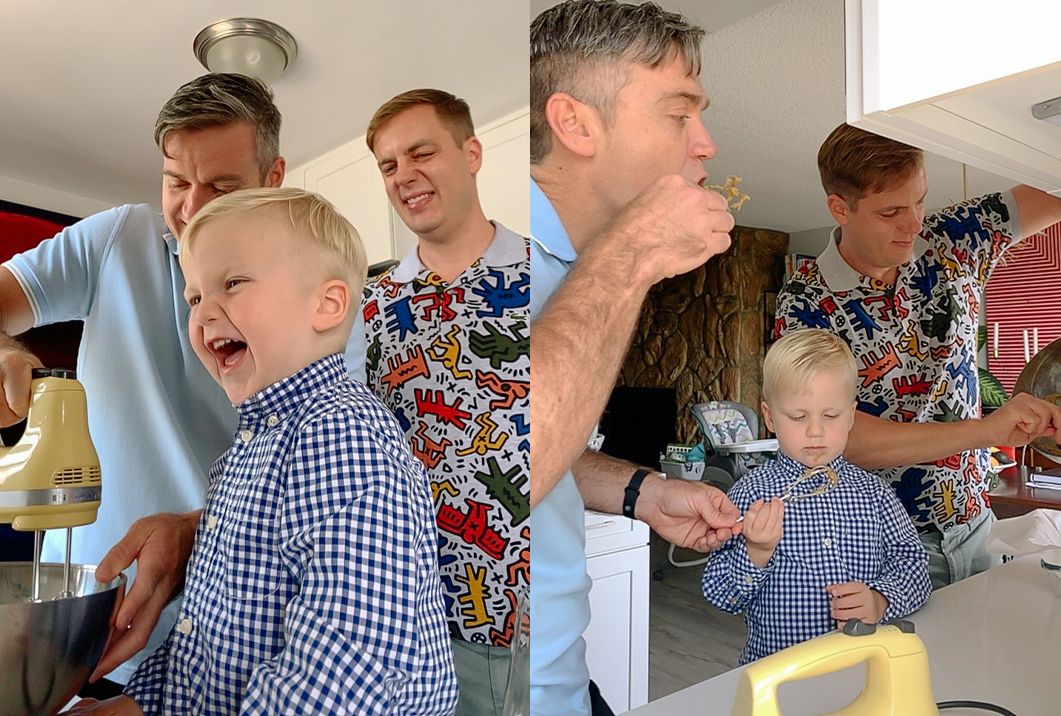 In search of my city

In the 90s, I was a student at Kyiv-Mohyla Academy and dreamed of continuing my education outside of Ukraine. I could not afford to pay for my studies at a foreign university, so I was regularly looking for academic scholarships and grants. After the summer program in Prague, I took an internship in Canada, and got there just a couple of days before the terror attacks on the twin towers in New York. The next “stop” was Bologna, Italy, where I got a full scholarship to study at Johns Hopkins University. It is an American university with branches in different countries, and in a year, I continued my studies in Washington, DC. The capital of the United States still means a lot to me. It's a place where it all started. There I felt adult and independent, and began building a career at the International Monetary Fund. In DC, I made new friends, and I still keep in touch with them. 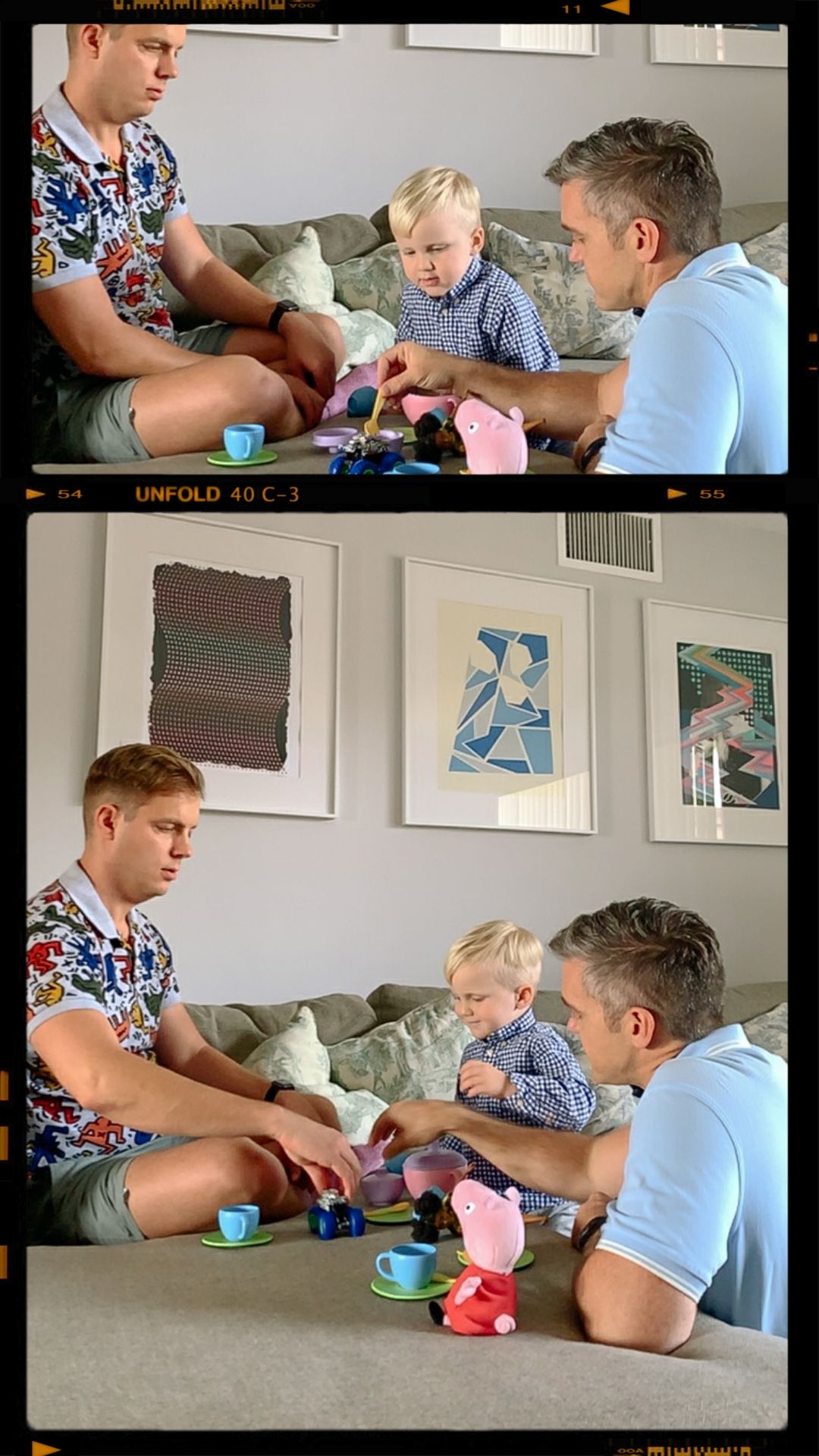 Soon my parents moved to the United States: they were fortunate to win a green card in the diversity lottery and settled in Miami. So, I realized that it was time to talk openly with them. I have already come out to my friends and sister and had a positive experience, but I could not immediately find an understanding with my parents. They reacted negatively at first and stopped talking to me for six months. However, I had my way of escaping from uneasy feelings. The next morning, I jumped on a plane and flew to Paris to study at HEC business school. Most of my efforts were directed to master the curriculum; there was little time for reflection.

Family for the citizen of the world.

A meeting that changed everything

Moving to Paris, I had no plans to return to the United States, so my friend and I decided to take a two-week trip through California before my departure. We arrived in San Francisco and went inland. We camped out in national parks, enjoying the scenery. At the end of our trip, my friend offered to stay in Palm Springs: it is a small town - an oasis in the desert near Los Angeles. There, we went to a gay bar and met a group of friends that came for a weekend to celebrate the birthday of one of their friends. That’s how I met Brian, my future husband. I liked him right away. I even did something crazy: on the last night before departure, I left my friend in San Diego, our departure point, and rushed to Los Angeles to see Brian again. I spent 5 or 6 hours in Sunday night traffic, and had to catch a return flight at 7 am the following day. There was a huge chance I could miss it, but I didn’t care. 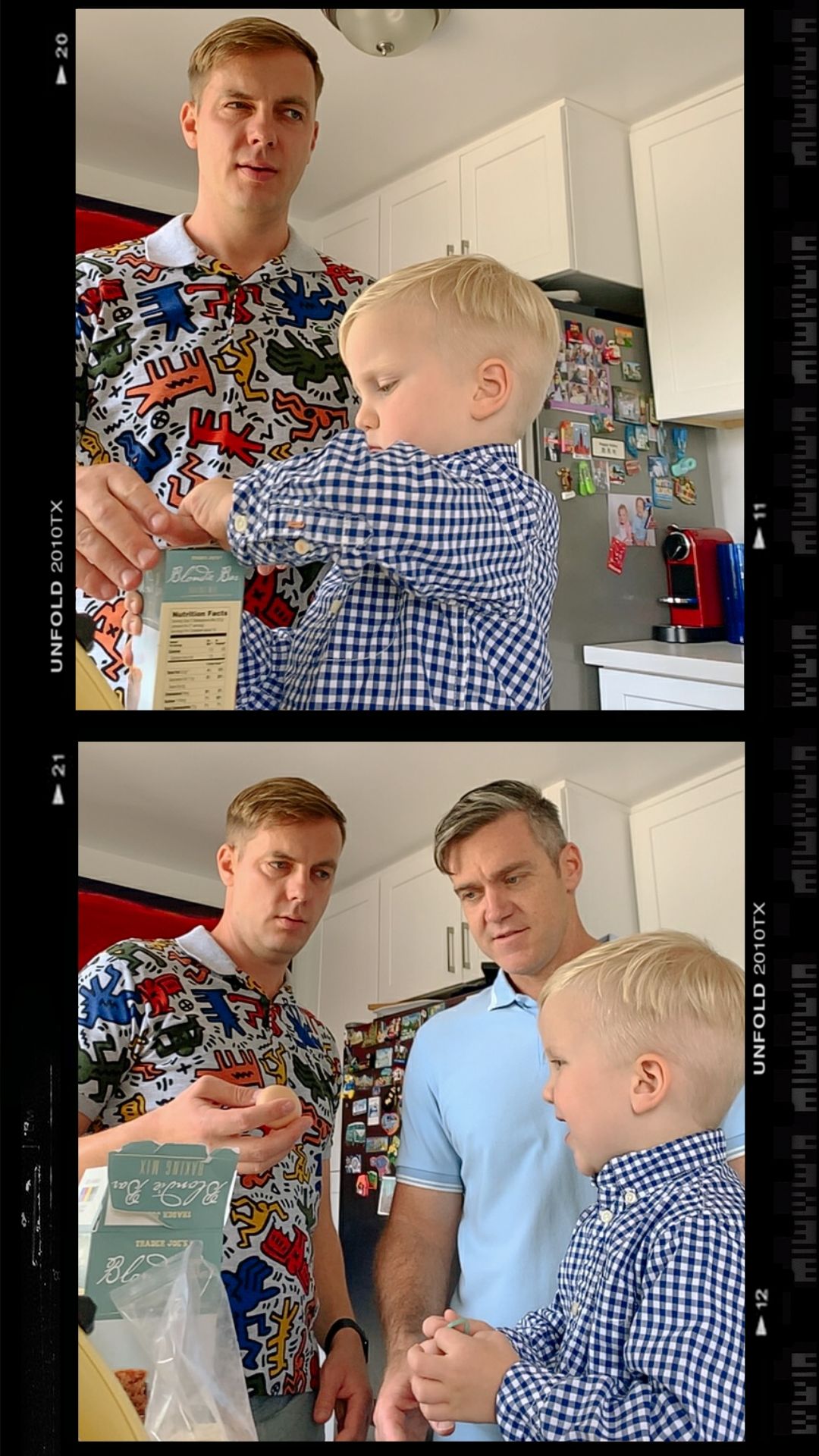 This meeting changed my plans: after a year in Paris, I participated in an exchange program in Los Angeles to be with Brian. We immediately moved in and started living together. He supported my career ambitions, moved with me to the UK and Hong Kong, where I got a job, but in the end, we decided to settle in the US and start a family.

In 2014, when same-sex marriage in the United States finally became legal, Brian and I got married. The wedding took place in Palm Springs, the town where we met. We also decided to stay there for paternal leave after the birth of Declan. We always knew that at the age of 35 we would try to become parents - and it worked out. Our friend had twins who were born through surrogacy, and he helped us with this process. At first, it seems very difficult to figure out what to do and in which order. Also, having a child through surrogacy is very expensive. The final cost of the service depends on many factors, but the bill starts at 80 thousand dollars. We were quite lucky and everything worked out after the first try, but it is not always the case. Some of our acquaintances had several attempts, and paid over 250 thousand.

We were not looking for a surrogate mother through an agency, which helped us save a little money. The situation was comical and tragic at the same time: the friend who became the father of twins simply wrote on his Facebook page that Pavlo and Brian were looking for a surrogate. And he tagged us in his post! We were shocked, because we hadn’t told anyone about our plans yet, and weren’t ready to announce them publicly. However, it worked - we found our amazing carrier in a few hours. There are groups of women who experienced the joy of motherhood and were willing to give this gift to those who cannot have give birth themselves. Surrogacy isn’t only attractive to gay couples - plenty of heterosexual parents struggle to conceive and carry a child on their own. When we came to the clinic, we saw mostly straight couples there: for them, it was the last chance to become parents.

The clinic had an anonymous egg bank. It was small, about 30 profiles. They offered a wide range of health information and genetic characteristics but didn’t reveal the identity of donors. Brian and I printed out the profiles in two copies; each chose three best candidates. One profile was selected by both of us and that’s the one we decided to go with. I know some couples choose to go the open route, interview them via Skype, talk to them, but that wasn’t important to us. When we found a surrogate to carry the baby, our lawyer prepared a detailed contract with all the nuances. In the later stages of the pregnancy, she took this document to the judge to obtain a pre-birth order for us. The contract states that the surrogate mother has no genetic relationship with the child; she does not plan to raise this child and receives compensation for being a surrogate. Her husband also agrees to the terms of the contract, so we have all the responsibility for the child. The judge issued an order that puts both of our names on the birth certificate as parent 1 and parent 2. This is the ideal situation, as it doesn’t require an adoption procedure by either intended parent.

Brian and I were present at the birth. The was delivered through a C-section, and we were in the operating room. We could even choose music, so our son was born to Beyonce’s song. After the first tests, the newborn was immediately given to us. 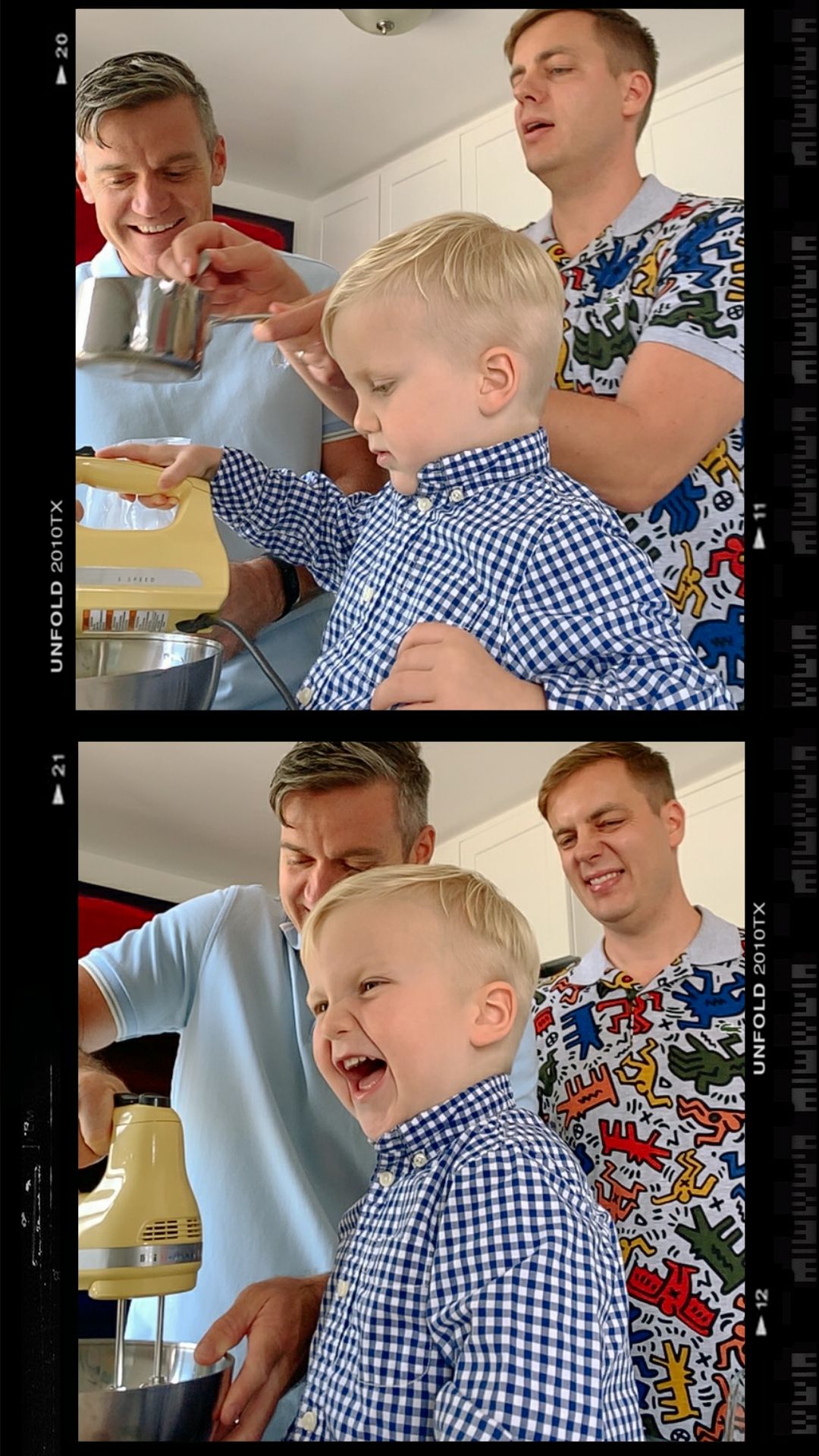 Of course, we had old friends and acquaintances, but when you have a child, it is difficult to see each other often. You can’t just decide and come somewhere in the evening, because you have to put your son to bed. We made several attempts to go to dinner, leaving the baby with the nanny, but still could not relax and thought about him all the time. A couple of times a year we bring Declan to Brian’s parents and go on a weekend trip to New York - this is our main chance to reconnect with our pre-parenthood days. My relationship with my parents has improved: they adore their grandson and are always happy to see him. We fly to see them in Miami even more often than they come to us - we are very mobile and travel with the baby since his birth. The first flight took place when Declan was only four days old. He was born in Cincinnati, Ohio, and we flew with him to Palm Springs, CA immediately after the discharge from the hospital. We were worried that such a little one would not be allowed on the plane, but there were no problems. The caring flight attendants even offered Brian and I a cocktail at 9 a.m. when they saw that we were tense and nervous young parents travelling with a newborn.

Gay couples with children are not very common, so when we are all together people pay attention to us. Fortunately, most people in Los Angeles are fairly progressive and their reaction is usually great. There were times when we met Hollywood stars: once we saw Reese Witherspoon, who dropped her bag on the ground, ran to Declan and told us she thought he was very cute. Sometimes people ask awkward questions like - who is the real father out of you two? And where is the mom? I understand that this is not necessarily intentional, people are still not used to it. It is important to respond to such questions calmly and with conviction. Declan is 2.5 years old now, and if such questions bothered me, he would notice and start suspecting that there was something wrong. I calmly respond, “We are both his father.” Another issue is that fathers usually take care of their children less often than their mothers, so I sometimes hear such comments like: “Aren’t you a good husband, babysitting your son while your wife can relax!” Dads don’t babysit - they parent. Everything takes time. There is an increased visibility of all types of families in the media and I believe that soon society will stop thinking in cliches and become more open to any kind of family. 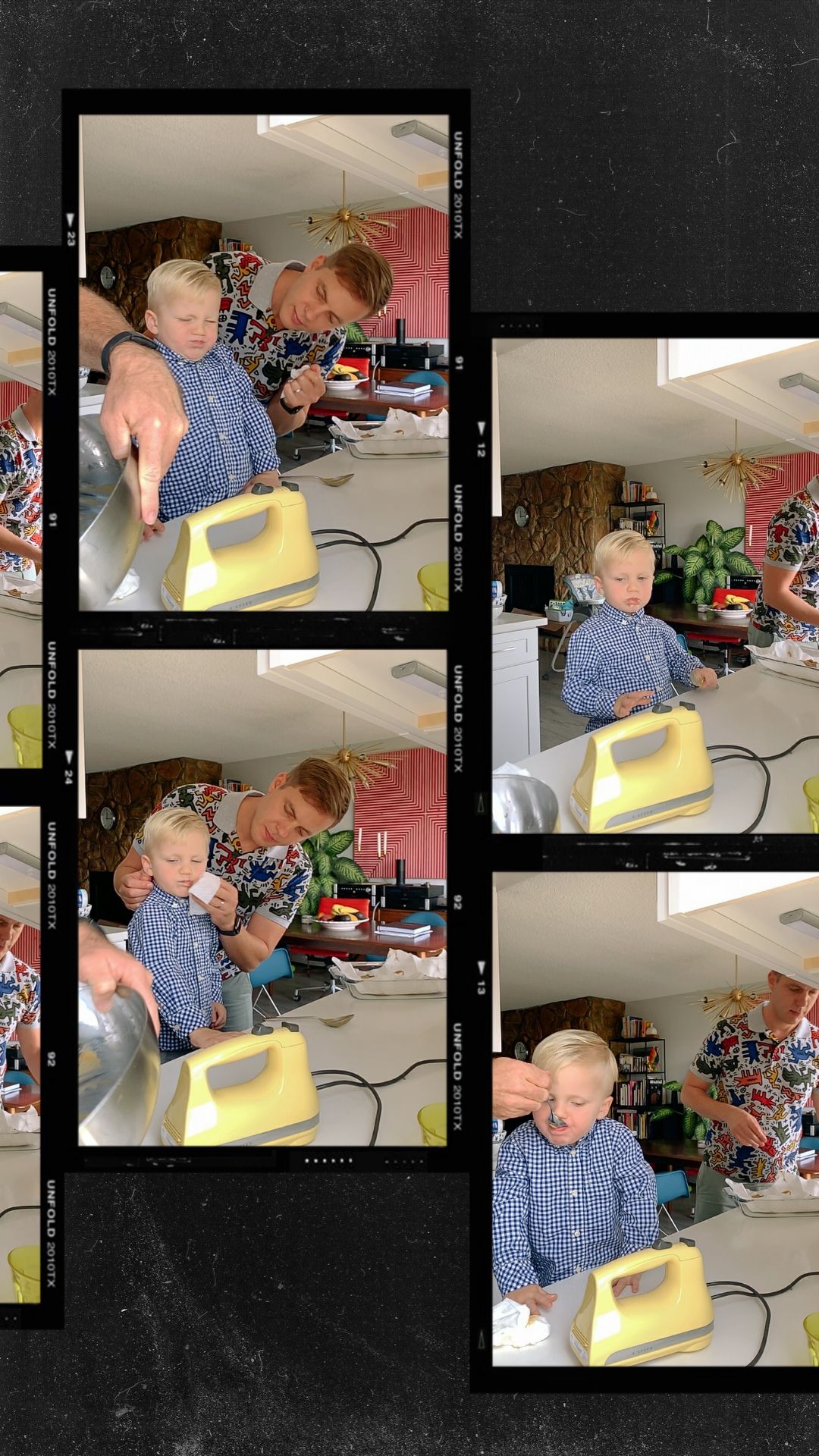