Edward Reese, a project assistant at Kyivpride, has been in the process of gender transition for a year. Because of the war, he was forced to leave Ukraine for Europe to have scheduled surgery. Edward told QUA how he was affected by the war and explained why the health of transgender people in Ukraine is even better than in developed and tolerant Denmark. 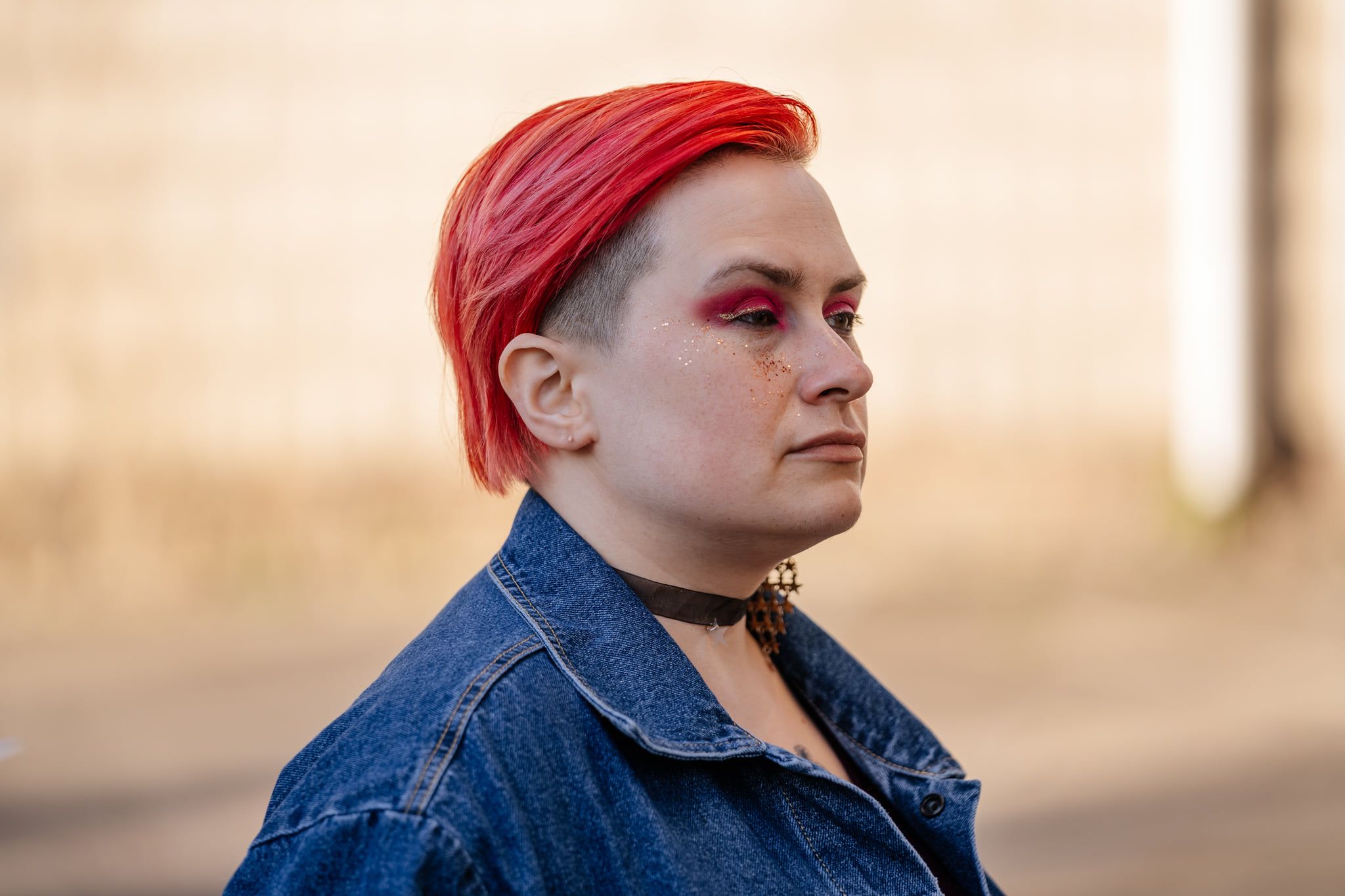 When the war broke out, I was in bed. I fell asleep late the day before because I watched Putin’s speech about the DPR and LPR and was very angry. I woke up on February 24 at 9 am and saw a bunch of messages from friends and family. Since I live on the Left Bank near a remote metro station, where nothing happens at all, we had almost no shelling. For the first few days, my neighbor and I ran to the shelter when we had air alerts, which annoyed the cat. And then we realized that no one cared about our district, no one would bomb it, so we arranged our sleeping places in the corridor.

So we stayed there the first days. The bridge to the right bank was closed, it was impossible to go anywhere, and I did not have the opportunity to volunteer. One day I realized that things I do sitting in my room, I can do in any other country. At the same time, I will not use resources that are more needed by the territorial defense or the elderly, I will not eat products that are difficult to deliver to the Left Bank, which is closed to the world. So, in order not to be a burden, I decided to go abroad.

Most of all I wanted to go to Sweden because I had been to this country before and had a little understanding of how it was organized. But at that time there were already a lot of people from Ukraine in Sweden, and I wanted to have at least some LGBT community. I did not have any information about such support in Sweden, but the Danish organization LGBT Asylum turned to our Kyivpride and offered help to those who wanted to go abroad. So I chose Denmark - after all, it is close to Sweden and very similar to it. On March 8, I left Kyiv, spent a week on the road, and on March 13, I was already in Copenhagen.

Support from the local LGBT organization is also important because I do not feel lonely in a foreign country. Now I live in a dormitory with other refugees from Ukraine, and although they are wonderful people, they are not my circle of friends. I want to have contact with those who understand me. LGBT Asylum works to help refugees from the LGBT community around the world. They supported people from Afghanistan, Syria, and now Ukraine. This organization holds various events - for example, we recently went to the spring camp with all kinds of entertainment, workshops, and refreshments. I also plan to take part in certain events and talk about Ukraine.

Our team remained almost entirely in Ukraine. On February 26, we had a trip planned to Bakhmut and Kramatorsk, Donetsk region, where we were to hold community events. Events were also planned in Kyiv, we were going to prepare for the annual Women’s March and Equality March. Of course, all this did not happen.

Now we have reformatted and are helping LGBT people. This includes financial support and contacts with foreign organizations and individuals who are ready to shelter our refugees. Europeans invite LGBT people from Ukraine, they provide accommodation and transportation. In fact, I traveled from Poland to Denmark the same way - my friend and I were taken to Denmark by local gay volunteers.

We also organized a psychological support group. Now, this is extremely important, because all Ukrainians are not in a very good psychological state. The team, which remained in Ukraine, volunteer, donate important equipment for Kyiv’s territorial defense, bring food to the elderly, and donate to the army and humanitarian initiatives. Kyivpride and Gay Alliance Ukraine are setting up a shelter in Kyiv for LGBT people - those who travel further west through the capital, or those who currently have nowhere to live. My main responsibility at the moment is to organize the communication for the community. I also manage and coordinate online events - psychological groups, chats for mutual assistance, and work with documents. We now plan to establish links between Copenhagen Pride and Kyiv Pride so that when the war is over we have partners in other countries. War is not a reason to stop the gender transition

My TikTok followers often complain that I call myself “he”, but instead of fighting, I left the country. In fact, I would very much like to go to the territorial defense, but I have no experience and my health is poor, so I will only be a burden. In addition, I still have a woman’s passport (I can change it only after completing all the main stages of the transition). I plan to partially solve the health problems in Denmark and return to Ukraine as a new person.

I’ve been in gender transition for a year already. I had a mastectomy scheduled for March this year. I passed all the necessary examinations, made the tests (it was rather expensive), took medication to prepare my body for surgery, and began to play sports. The war interfered with my plans, but I have to do the operation anyway, I need it badly. I’ve arranged everything with a private clinic in Sweden, where they miraculously found a free slot. It may be expensive, but this is something I was saving money for. Why Sweden? Unfortunately, it is currently not possible to perform a mastectomy in Denmark. Although it is one of the most tolerant countries in the world, with rainbow flags almost everywhere and same-sex marriages, the situation with the health of transgender people is difficult. For some, it may sound strange, but in Ukraine, it is much easier to go through the transition procedure than in many European countries! In our country, a transgender person can start the transition and take male or female hormones as soon as s/he receives a certificate from a psychiatrist with the diagnosis of “transsexualism”. In Denmark, a person must wait two years after confirmation from a psychologist (there is no diagnosis). And then, to be able to have any surgery, one has another year to take hormones. The operations are free, but they take a long time.

Transphobia in Ukraine is not as bad as it seems

There is a lot of misinformation about the health of transgender people and attitude to them in Ukraine. There is an opinion that the transition procedure in our country is quite humiliating. Yes, there can be some problematic moments, because everything depends on the doctor. But as a person who received a certificate from a psychiatrist in the summer of 2021, I can say that although it was not very pleasant, you can manage it. And you can take care of yourself in advance, talk to activists, find friendly doctors, morally prepare for the examination, and everything will be fine. We have already made several official statements on behalf of Kyivpride about the transgender transition in Ukraine and refuted false information that is actively leaking from the

The reason for this is simple. Currently, many people want to leave Ukraine and become refugees in other countries due to the alleged great transphobia. But transphobia and homophobia in Ukraine are not as strong as, for example, in Russia or Belarus, so people have to lie and invent various scary stories to stay abroad. Foreign media are happy to pick them up. For example, Ukrainian singer Zi Famelu recently spoke about horrors that have never happened in Ukraine. She and some other girls are creating Ukraine’s image as a country where it is simply dangerous for transgender people to stay. Kyivpride has to refute such posts almost every week.

I am convinced that transgender people can stay in Ukraine, and all the activists I know have done so. And over time, it will be even easier and safer for us. Now it is obvious to everyone that homophobia, transphobia, xenophobia, and racism are Russian narratives that are not typical for Ukraine. The desire to distance ourselves from the influence of our evil neighbor will help us become more tolerant and stop taking these “values” from Russia. Even Ukrainian radical feminists have ceased to be friends with Russian ones, and a considerable stream of transphobia comes to us precisely from the radical feminism of the neighboring country. We have already memes that the EU has applied to join Ukraine. We really want to join the EU, and although Europe does not really make us happy now, we support European values. I think that the desire to get closer to Europe will help us to implement all initiatives related to human rights, finalize legislation against hate speech, and so on. After we win this war Ukraine will become better as a country.